Due to “renovations” to the Hanna Hall building, the theater has been relocated to the Bowen-Thompson Student Union Theater (Room 206), along with a few of the pieces of memorabilia from the original theater.

Sunday’s celebration of the 40th anniversary of the Lillian and Dorothy Gish Film Theatre on campus took place under a shadow.

The theater in Hanna Hall faces relocation as Bowling Green State University makes plans to convert the 95-year-old building into a new home for the College of Business Administration.

That would mean the removal of the theater, its affiliated gallery and the Wolfe video collection and viewing room from Hanna Hall.

University officials have promised to find a new home for the facility on campus.

Wolfe, who is the founder and curator of the theater, said that he’s been told the theater would move into the theater space now in the Bowen-Thompson Student Union. But that would not have room for the collections of memorabilia and the video collection, he said.

“The theater space in the student union can in no way rival the aesthetics of this space and will not have the gallery documenting the history of American film,” Wolfe said.

He said he saw no contradiction in the theater remaining after Hanna Hall becomes the home for the College of Business, given the film industry is so large.

Lillian Gish herself has visited the venue four times, first in 1976 when it was first named for her and her sister, and the last time in 1982 when the lobby and gallery space was dedicated, Wolfe said.

At that time, Academy Award-winning actress Eva Marie Saint also attended, the first time she’d returned to campus since her graduation in 1947.

James Frazer, Gish’s manager, who was the special guest for the occasion, said she was proud of the theater at BGSU. He traveled around the world with her as she promoted her view of American film, and that vision lives on in the theater. “This gives the right impression to the world.”

University spokesman Dave Kielmeyer said that the student union is an option for the new location of the theater, but plans have not been finalized.

He said it would be spring before any further plan on Hanna Hall is presented to the board of trustees.

The celebration included a talk by Frazer about his career which began with a teenage infatuation with an actress, led to playing kid parts in Westerns, and culminated decades later with his affiliation with Gish. He traveled with her around the globe where she made presentations.

It was at one of those in 1971 at then Findlay College where Wolfe, a professor of English at BGSU, first met the legendary actress. She and her sister were born in Springfield, and she made her stage debut in Risingsun, before her mother moved her and her sister to New York, where the mother pursued acting, followed by her daughters.

Shortly after seeing Gish in Findlay, Wolfe approached then BGSU president Hollis Moore about awarding an honorary degree to Gish.

When the auditorium in Hanna Hall was renovated in 1976 to support the new film studies program, he recommended it be named for Gish.

The trustees agreed if Gish would attend the dedication. Wolfe reached her through Frazer. Gish said she was honored, but would be more honored if the theater was named for her sister as well.

She visited BGSU for the first time for the dedication and to receive an honorary doctorate. She returned the campus three more times, the last occasion in 1982.

The Gish space expanded as programs were moved out of the building. The Wolfe viewing center was opened in 2009.

An endowment, which was started with $500,000 in private donations including many from some of the biggest names in Hollywood, was established to support programming. Wolfe noted programming at the theater is free, as Gish wanted, and now includes three film series. Proceeds from the endowment were also used to create the viewing center which has a collection of video cassette recordings donated by Wolfe.

The celebration included the showing a tape of the broadcast of the ceremony in which Gish received the Lifetime Achievement Award from the American Film Institute, where she was honored not just for her acting, but her business acumen and her dedication to film preservation.

Now it falls to Wolfe and his supporters to try to preserve the theater that bears her name.

It was through Wolfe’s efforts that the university granted the legendary actress Lillian Gish an honorary doctorate. When the auditorium in Hanna was converted into a film theater to support the new film studies program, he approached her about naming the venue in her honor.

She said she’d prefer if it were named for her and her actress sister, Dorothy. She came to campus in 1976 to receive the honorary degree and participate in the dedication of the theater.

It was the first of four visits. The last was in 1982 when the lobby was dedicated. At that time, she brought BGSU alumna Eva Marie Saint with her. It was the first time Saint was back on campus since her graduation in 1947.

Films will continue to be shown in the venue through the end of the academic year in spring. 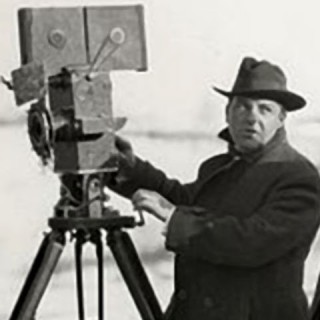